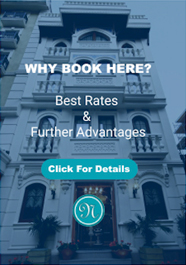 The Grand Bazaar was built in the 15th century. It has several gates:
the most used one is at Cagaloglu and Beyazit (15 minutes walking distance from the Hotel). Istanbul’s legendary bazaar is a labyrinth of over 4,000 little shops and is everything you dreamed an oriental market could be. It offers gold, jewellery, carpets, silver bibelots, leather, ceramics, copper and brass objects, hand-woven textiles and meerschaum pipes.

The Church of Holy Wisdom, undoubtedly one of the greatest architectural
creations in the world, was built by the Byzantine Emperor Justinian around 535 AD. It was transformed into a mosque after the Ottoman conquest of the city in 1453. Now a museum, it is awesome in size and contains beautifully preserved Byzantine mosaics. This church is an absolute must see.

Built in the 15th century, the Topkapi Palace was the principal residence of the Sultan. It was the legendary palace of the Ottoman Sultans from the 15th to the 19th centuries. The palace has low buildings set in a series of courtyards and is quite unlike its western counterparts. Be sure to see the Harem (by appointment), the Treasury and the golden-roofed Baghdad Kiosk.

This sixth-century church is located within the courtyard of the Topkapi Palace.

This awesome columned cavern was the water source for both the Grand Palace of the Byzantine Empire and for the Ottomans’ Topkapi Palace.

This mosque was built in the early 17th century and is probably the most famous
mosque in the city. It is distinguished by six slender minarets and walls
covered with amazing blue Iznik tiles. Open daily 9:00 am to 5:00 pm,  except during prayer times.

This cruise stops at various fishing villages on the way to the Black Sea.
The cruise is offered twice daily.

Boat cruise on the Bosphorus

The Spice Market was built in the 17th century as an extension of the Grand Bazaar.
It is an exotic food market and bazaar that sells spices, dried fruits, cheeses and
olives, as well as towels, slippers, baskets and jewellery. Outside the market
there is a wonderful flower and bird market.